I took another very interesting on-line course with the American Quilt Society a couple of months ago: Artistic Painted Appliqué with Linda M. Poole.

I already had watercolor pencils and blocks for another painting project.  I was also deep into Acrylic Painting for Wall Hangings, so I figured why not!

This is a bit of a long story, but it shows how I decided what worked best for my applique project.

This process required a few special items.  One of them was easy to find - PFD fabric.  PFD stands for Prepare for Dye and is basically the state the fabric is in, prior to having designs printed on it.  It's essentially plain, white, cotton fabric.

As for the other item, I admit that I made couple of purchasing mistakes.  I attribute this mistake to the instructor leaving out a few details.   She teaches as if you've been doing applique for years.  She neglected to state which specific products you needed, specifically the water soluble fusable.   I stopped the video, took screen captures and tried to make the product titles and numbers readable.

After an excruciating amount of time, I found the correct product:  Floriani Stitch N Wash Fusible.  Floriani makes a wide range of products.  It's not very cheap, but I found a 20 yard roll for $26 at Embroidery.com.

I didn't know where I was going with this, but I knew I wanted to start with tropical fish.  My first several pieces turned out alright, but I didn't feel like I was getting the bright colors I really wanted.  The colors were very washed out.  It was also a little wrinkly in places with visible air bubbles.   I'm going to show them as way to compare the progression of my work.

First up - the mistakes- which I freely admit!  Learning is doing and sometimes you do things wrong the first few times. 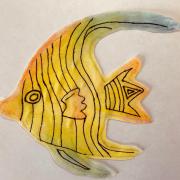 I call this particular fish the Ninja, well, for obvious reasons.  I liked how the scales came out, but it just got out of control! 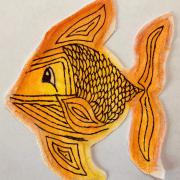 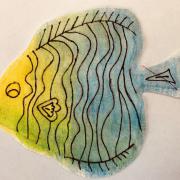 By the time I got the yellow fish, I knew I needed to find a very different route. 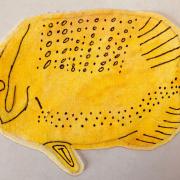 The gel pen was not working.  Maybe I was using cheap pens or the wrong type of pen or maybe I needed a lot more practice.  I decided to put everything down for a few weeks.  I re-watched some of the class again and realized that I was using the liquid fabric medium and water ALL wrong.  My iron may have also had residual water in the reservoir, which led to the air bubble coming out of the water soluble stabilizer.   You cannot use water or the water soluble stabilzer will desolve, while you're working on it.

I decided to try my hand at several rainbow hearts and then I knew I was on the right track.  The colors were bright, they blended a much better and the air bubbles were gone. 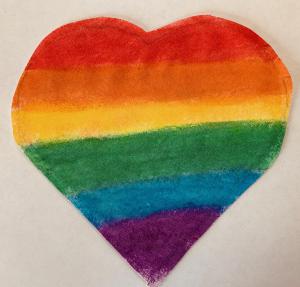 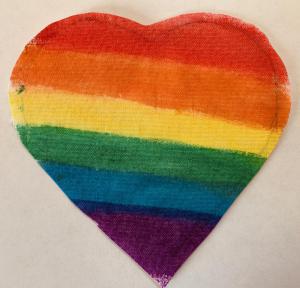 I decided to turn back to my Acrylic painted canvases again.   I figured I would eventually come up with a better plan of attack with the tropical fish.

It wasn't until a few weeks later that I realized how both the watercolor fish and one set of acrylic canvas sets were intersecting: The Caribbean waters with tuquoise and blues.  Where do  tropical fish live?  Bingo!

The next thing I had to figure out was how to make the tropical fish look even better.   I put it on hold again, because we were also heading for an off-season vacation to Charleston, SC.

We've been visiting Charleston 1-3 times a year for 15 years.  I knew I wanted to start hitting galleries and a couple of consignment shops that specialize in artwork- painting, pottery, mixed-media, just about everything.

I had to visit Karen's Korner Frame and Art, because an artist I have been following teaches classes there in acrylic painting.   Elizabeth Melton does some fantastic artwork work and I really want to take her class in 2019!

As I was looking around the shop, I was drawn to a sea turtle.  This small sea turtle was actually a piece mixed media artwork.  It was three dimensional and had a felt-like surface.  On every section of the turtle, small objects (shells, twigs, grasses, etc.) were senw onto it.   In that moment, I realized that I could replace the gel pen on my tropical fish with hand embroidered thread.

And this is where it led me... 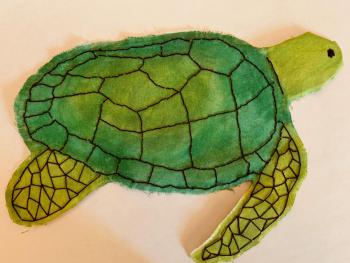 I had trouble deciding the color layout and how to stitch the details on the sea turtle, until I stumbled across this little guy in a booth at Southern Accent Designer Showcase in Mount Pleasant, SC.  The booth owner happened to be in, so we talked for a while. 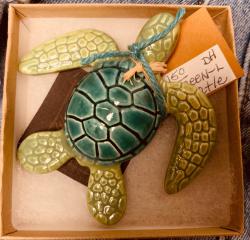 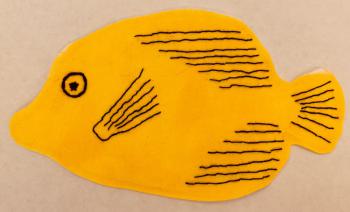 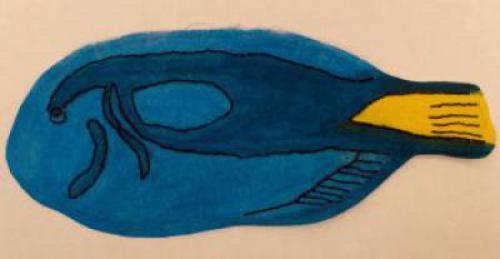 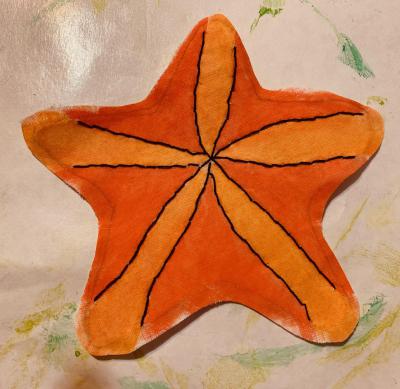 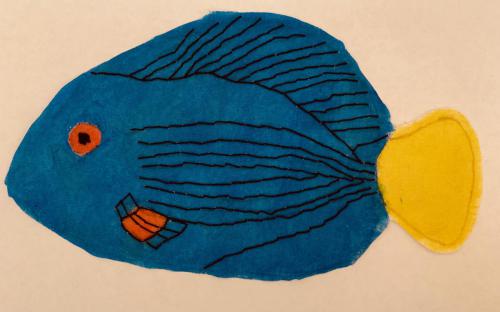 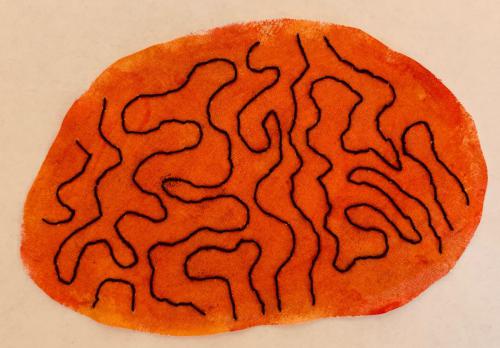 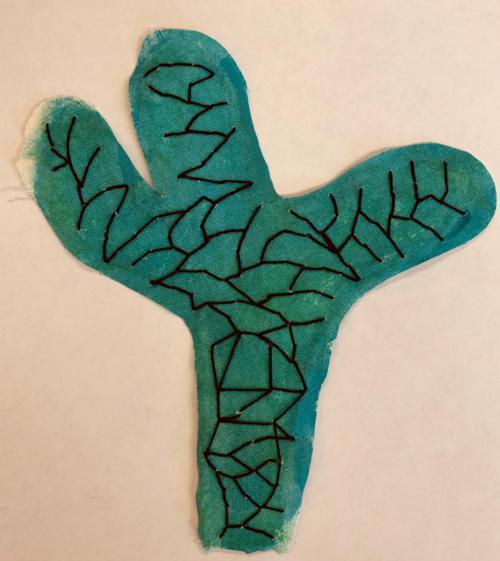 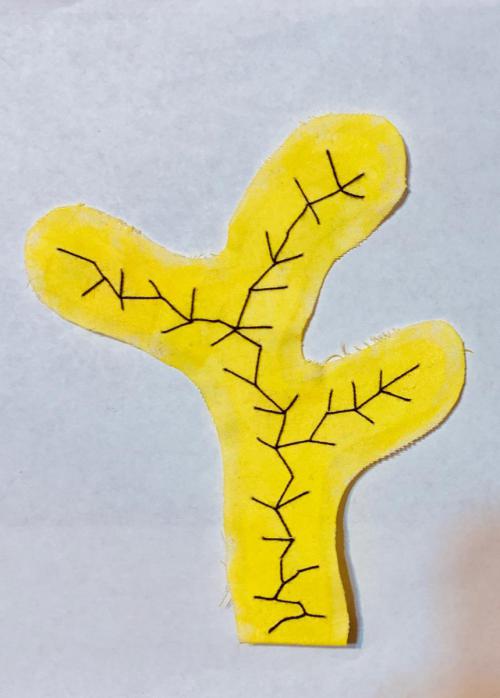 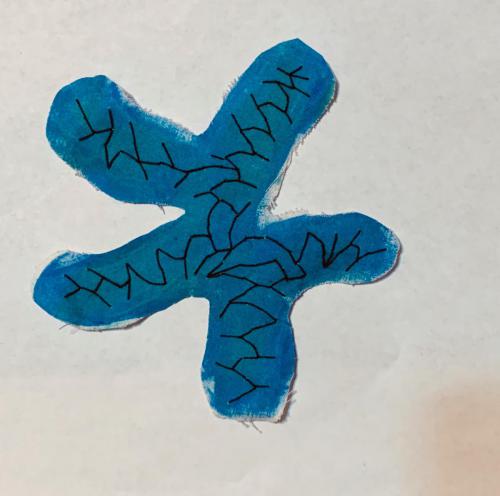 I'm still thinking about creating a purple version of the coral.

With all of these pieces are completed, I'm starting to look forward to stitching them only pieces of the acrylic painted canvases.   I'll be looking over the three canvases in the coming weeks to figure out how I will cut them  and determine where the fish will be swimming in my Caribbean waters.